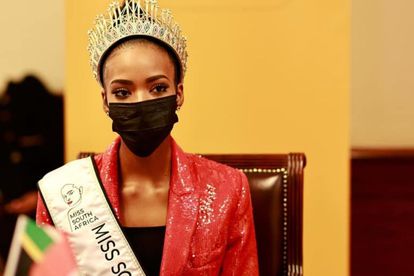 Lalela Mswane has hardly had time to adjust to her new role as Miss SA, and she is already facing her first major challenge; deciding whether to continue her participation in the Miss Universe 2021 in Israel or to heed calls for her to boycott the beauty pageant.

The newly crowned queen has been facing increasing pressure to bow out of the Miss Universe pageant set to take place in Eliat, Israel on 12 December 2021.

And now fans are criticising her every move…

Lalela Mswane has been targeted on social media by followers calling on her to step down from participating in the Miss Universe pageant or face the wrath of angry South Africans.

In several posts on the Miss SA Instagram page and on her own personal account, the 24-year-old has been bombarded with comments attacking her character and criticising the organisation.

Here are a few…

Are you going to address the calls to boycott apartheid IsraHELL??

Io not support this nor do I support you @lalela_mswane, you are from a country that went through difficulty trying to overcome apartheid yet you supporting another country where apartheid is present WITH additional genocide, torture and evictions taking place. DO BETTER!

This is not a true Queen as a matter of fact this is considered as betrayal. Disappointed.

Actively choosing to take a stand and not partaking in the Miss Universe pageant this year is the only right thing to do. Let the Israeli government know where South Africa stands. We do not stand for injustice!

It’s a pity that those representing a country that was oppressed under the apartheid regime are the same ones supporting another apartheid state!

Some followers are even using the hashtag #NotMyMissSA to discredit the law graduate.

CAN LALELA MSWANE SAY ‘NO’ TO MISS UNIVERSE?

Miss SA organisers have already laid their cards bare on the issue of Miss Universe, officially stating that they are “not getting involved in a political war of words”.

This follows criticism by Mandla Mandela – the grandson of former SA president Nelson Mandela – who has criticised Miss SA organisers and other countries who decide to continue their participation in Israel, which he deems is an “Apartheid state”.

But should she choose to, is Lalela Mswane in a position to turn down participating in the Miss Universe pageant?

According to the organisation’s “frequently asked questions”, the model and ballet dancer is contractually bound to perform her duties in the pageant throughout her reign.

The Miss SA website states: “The winner of the Miss South Africa pageant will be contracted to the Miss SA organisation as a brand ambassador thereof for the full year reign”.