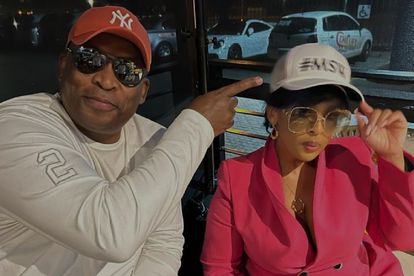 Nonku Williams – who is a Real Housewives of Durban cast member and businesswoman – has poured cold water on rumours she is dating sports broadcaster Robert Marawa.

At the weekend the two celebrities set tongues wagging when a video of them locking arms while they sipped on wine went viral.

The mom-of-three has addressed these claims by explaining the viral video as well as the snaps she posted on her Instagram.

Ms Williams released a statement on her Instagram, addressing the relationship rumours circulating about her and the radio host.

Nonku explained that she was introduced to Marawa through her PR lady. This was mostly because the mutual friend knows that Robert has an appreciation of red wine, considering Nonku owns wine brand A2B.

“Past Saturday I was invited to the Standard Bank Polo in Joburg. I had promised to give Robert my red wine collection. Clearly the wine was superb and Robert appreciated it and gifted me with his MSW(Marawa Sports Worldwide) memorabilia… other than the work, there’s nothing to say. We are colleagues supporting each other’s businesses…” she explained on IG.

According to Drum Magazine, Nonku reiterated to them that there is nothing going on between her and Marawa. She explained that the whole thing started as a joke and when they saw fans calling them a cute couple, they played along.

“It was just business more than anything. I want to list my wines in all major restaurants across South Africa. He also has Marawa Sports Worldwide, and I posted wearing his branded cap,” the outlet quoted her as saying.

‘ROB IS SUCH A GENTLEMAN’

While a large number of social media users seemed to love the idea of the pair possibly dating, some started making comments that Nonku found offensive.

“I’m sure from there they went straight to the bedroom,” was one of the comments she remembers and found to be distasteful.

Following some of the negative comments, she says her new friend Marawa (whom she calls Rob) called to check up on her.

“I don’t care about what people think. Rob is such a gentleman. After the whole thing blew up on social media, Robert checked up on me because he was concerned. He is a gentleman, and we are fine,” she said.

She also added that she is single and has been for over a year.

On Friday 6 May, the much-anticipated Real Housewives of Durban reunion will air.

After a very drama-filled and tumultuous season two which saw three new housewives join the cast, Nonku looked back on the season that was.

Singer Londie London, radio host Thobile Mseleku, as well as Jojo Robinson, joined the reality show in its second instalment. This is after businesswomen Ayanda Ncwane and Kgomotso Ndungane exited.

For most of the season, Nonku was accused of being a drunkard by some of the other ladies.

Addressing the allegations, she said: “Every episode of Real Housewives, my name has to be there. People are just cruel. I have been labelled an alcoholic and I never confessed to having a drinking problem because I don’t. People misunderstood.”

She highlighted that she does not go clubbing or smoke hubbly bubbly, she just drinks wine to distress.

“I am sick of the controversy, to be honest. It felt good for me to explain myself and confront the ladies. I handled everything maturely,” she concluded.