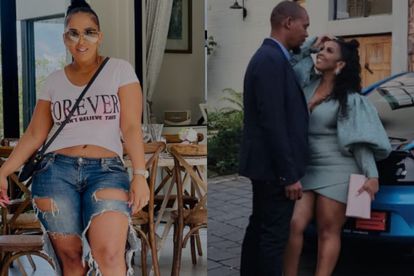 The new man in Nonku Williams’ life has been labelled ‘the biggest crook’ with one woman claiming she ‘shares the same bed with him.’ Image via @nonku_williams/Instagram

The new man in Nonku Williams’ life has been labelled ‘the biggest crook’ with one woman claiming she ‘shares the same bed with him.’ Image via @nonku_williams/Instagram

Businesswoman and Real Housewives of Durban (RHOD) star Nonku Williams has a new man in her life and she’s showing him off.

However, the mystery man, whose face was not very visible in the pictures the A2B Winery owner shared, is allegedly dating other women.

Taking to her Instagram at the weekend to show off her new bae, Nonku wrote: “Comment only if you approve”.

According to ZAlebs, Nonku’s friends and fellow RHOD cast members Sorisha Naidoo, Annie Mthembu and Jojo Robinson have already met the new man in Nonku’s life and they approve of him.

BUT IS HE A WOMANISER?

Instagram blog Maphephandaba revealed that a lady named Cece Jones came forward to reveal that she has been with Nonku’s boyfriend. The woman in question claimed to share the same bed as Nonku’s man as she shared receipts, video calls to backup her claims.

Another social media user claimed that the man in question is from their hometown in Richards Bay, KwaZulu-Natal, also labelling him “the biggest crook” — The Tea World reported on YouTube.

“He’s also entangled with some chick from Portshepston he’s for the streets shem [sic] she’ll drink more than ever he’s bad news,” someone else commented.

Earlier this year, Nonku was linked to popular sportscaster Robert Marawa but she nipped those rumours in the bud.

The rumours started when the reality TV personality shared pictures of herself and the former SuperSport presenter looking rather cosy and enjoying each other’s company.

However, the-mom-of-three addressed the claims, saying they are just friends.