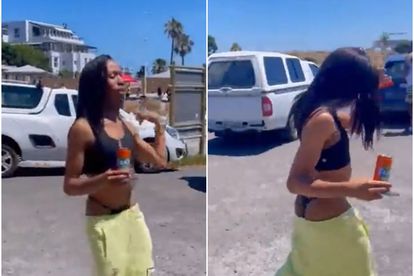 Lasizwe spotted in a G-string again
Image via Instagram
@lasizwe

Lasizwe spotted in a G-string again
Image via Instagram
@lasizwe

Lasizwe is undoubtedly living his best life – in a G-string!

The YouTuber and reality TV star has taken another dig at “haters” who not only body-shamed him but accused him of a “attention seeking” stunt.

The star, who clapped back at critics on Monday,  was seen strutting his stuff in a thong in a video posted on social media the next day.

Days after making a controversial appearance at Konka in Cape Town, Lasizwe is back at it in his G-string.

The star posted a clip of himself wearing a black crop top, a baggy pair of shorts and a very lacy G-string.

And his followers heaped on the praise for his brazen and IDGAF attitude.

CELEBS BACK LASIZWE – INCLUDING UNCLE WAFFLES!

In the comments section, a number of celebs praised Lasizwe for his bold move

On Twitter, Lasizwe’s BFF Mihlali showed him love. “They’re jealous they can’t pull it off like you did baby”, she said of his shock-worthy appearance.

And even Uncle Waffles – who inspired the look – gave her seal of approval.

The female DJ retweeted the images alongside an in-love emoji.