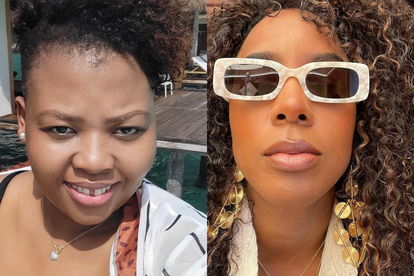 Anele Mdoda’s 2019 tweets have finally caught up with her and it’s pretty hectic. The South African media personality has been trending on Twitter as American Twitter users take turns to drag her for her comments about Kelly Roland being ugly without makeup on.

Anele and Kelly are still trending

On Wednesday this week, South Africans witnessed how US singer Kelly Rowland shaded media personality Anele Mdoda who said that she was the least pretty of all the members of Destiny Child.

The tweet continues to haunt The Breakfast Club radio host because whenever Kelly Rowland trends, so does she. Locals are convinced that Kelly may have picked up on this because she just headed online to share a snap of herself rocking the same yellow swimsuit that Anele wore recently.

This left tweeps buzzing as they all discussed what they are assuming is a couple of trees worth of shade coming from Kelly. And now American Twitter users have also picked up on the supposed beef and let’s just say – it’s going really bad for Anele who is now being roasted beyond recognition on Twitter.

Naturally siding with Kelly Rowland, many US tweeps have started dragging Anele. While some of them poked fun at her gap, others compared her to American actor, Anthony Anderson. Meanwhile, certain South Africans have decided to disown her.

“lmaooo I need to see the referenced tweet. ain’t no way”

“First of all South Africa wishes to distance itself from Anele’s comments…we don’t even know Anele. It’s all love for Kelly this side.”

Meanwhile, Anele can’t be bothered and is seemingly continuing about her business as usual.

In fact, early on Friday morning, she shared the same swimsuit snaps on her Twitter page just to make sure people knew that she was sticking by her guns and confident in her skin.