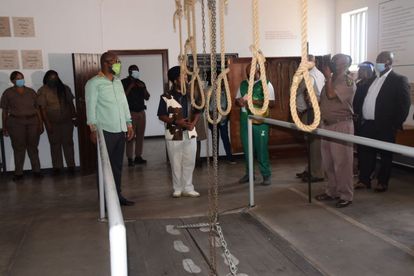 Minister of Sports, Arts and Culture Nathi Mthethwa has been criticised for a “insensitive” tweet posted on the day of the funeral of rapper Riky Rick.

The star was laid to rest in a private service attended by friends and family on Tuesday, 1 March.

The minister – who shared a picture of a gallows – was dragged by fellow stars and tweeps in light of the timing of his post. This after Riky Rick reportedly hung himself in a suicide attempt last week

During the same time the funeral of Riky Rick took place, Nathi Mthethwa was visiting the launch of a local museum.

He tweeted: “Earlier today, we were at Kgosi Mampuru Museum in Tshwane in the Gauteng province to officially launch Human Rights Month. As an integral part of our programme we embarked on a tour of the Kgosi Mampuru Gallows Museum, a national heritage site”

Accompanying the tweet were pics of several gallows with a neck noose suspended above.

But many lamented the minister on the timing of his tweet.

“Nathi Mthethwa has the gall to go for a tour and show us this.We have idiots as leaders”

“Nathi Mthethwa is a primary example of our government not being in touch with the realities of the masses of this country. Riky Rick was right when he said we are on our own, they are proving him right even in death. So insensitive sies”

“Dear Minister Nathi Mthethwa, some of us are going through a lot and one of our homies just committed suicide…What’s wrong with you!? Couldn’t you wait until tomorrow or some other time when we’re a bit healed?”

‘THIS IS A DELIBERATE MOVE’

Other tweeps thought the move was “deliberate” on the minister’s part.

“I swear this is a deliberate move by Nathi Mthethwa, who knows this may be petty for not being invited to Ricky Rick funeral as Minister of Arts & Culture”

“You planned this and you knew exactly what you were doing”