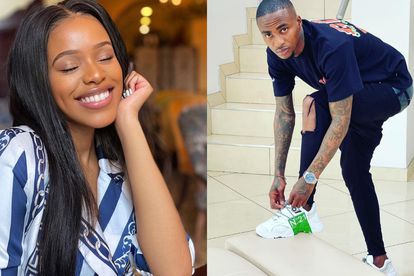 Orlando Pirates player Thembinksoi Lorch was dragged on Twitter after his girlfriend Natasha Thahane said she received a R1 million scholarship to study abroad on an episode of Podcast And Chill on 25 November.

This caused an uproar on Twitter. Tweeps wanted to know Natasha received that amount of money while other students were struggling for funding. After former leader of the Democratic Alliance (DA) Mmusi Maimane asked Natasha to explain to the public, she released a statement. The statement said that didn’t have a personal relationship with Mbete and she only received R350 000.

“She (Mbete) advised me to explore the Department of Sports and Arts and Culture because they have got funding opportunities. That was my first conversation and last conversation with her. She did not make any calls on my behalf and did not send any emails on my behalf and I apologise for diluting the entire scenario because I made it seem like I had a personal relationship with her,” she said.

“My man Lorch’s stats are going down. Lorch is now injury prone and you have turned him into an influencer. Lorch, who is supposed to be one of the most talented footballer’s this country has ever seen, now is an influencer,” said Silk Talk.

Tweeps slammed both Lorch and Natasha.