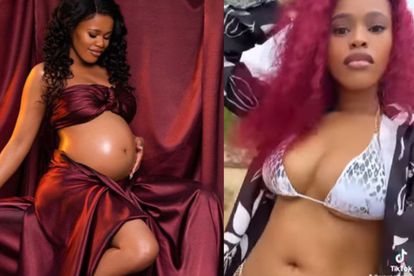 Twitter users have weighed in on actress Natasha Thahane post-pregnancy body while on baecation with Orlando Pirates soccer star Thembinkosi Lorch as seen in Instagram Stories on Wednesday 29 June.

Natasha Thahane took to Instagram on Wednesday 29 June to show off her post-pregnancy body.

She is seen wearing a bikini and Tweeps quickly noticed her flat stomach. This is just just about two months after she gave birth. The seven-second-long video was taken on vacation, which may just be a “baecation” with her on-and-off boyfriend Orlando Pirates player Thembinkosi Lorch.

The pair have not revealed where they are vacationing, but many seem to believe Lorch is definitely the “baby daddy” now! This comes after rumours that Lorch cheated on Thahane with actress Thando Make.

The Blood & Water actress is believed to have given birth at the end of April this year after she announced her pregnancy in March. She also revealed that she returned to the Blood & Water set on 17 May — which is under a month after she gave birth – confirming that she is in fact in season three of the series.

Twitter users have weighed in on Natasha’s post-pregnancy body with many noticing her flat stomach. Some thought she lost the “baby fat” because of her money.

“Money is everything, affording good doctors while you pregnant is everything from lotion products to use for your body….Good genes? Why don’t you ask yourselves why almost every celebrity after pregnancy don’t suffer the norm as ordinary people, it’s money guys not genes,” commented @hi Ndamase.

“I’m convinced post pregnancy tummies are a poverty thing like that black line from the breast to the belly button, celebs don’t get those,” commented @GXIImalux12.

Others brought up her R1 million scholarship scandal. Natasha said she received R1 million in funding to study abroad on an episode of Podcast And Chill on 25 November. She also said that former speaker of the National Assembly Baleka Mbete assisted her. This sparked a debate on Twitter and many called for her to pay back the money.