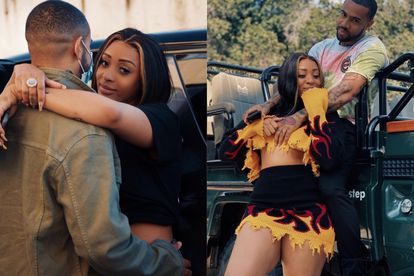 South African rapper Nadia Nakai revealed that she and American rapper Vic Mensa have broken up on an episode of Drink or Tell the Truth with Lasizwe Dambuza on Friday 27 August.

On the episode of Drink or Tell the Truth, the Naaa Meaan hitmaker briefly mentioned that she and her American boyfriend Vic Mensa have broken up. She did not provide any details though and actually didn’t seem too fussed about it…

When Lasizwe asked Nadia who she would have kids with if she had to choose between her ex-boyfriend Bandile (Major League DJ) and Vic Mensa, she responded by saying Vic Mensa. However, she then revealed that they “kinda broke up”.

“Well we kinda broke up so, but it’s fine, it doesn’t matter,” said Nadia.

The couple got together after Vic Mensa slid into Nadia Nakai’s Direct Messages (DM) on Instagram and the pair thereafter took their conversation to WhatsApp and confirmed that they were dating in April 2021.

They couple met in Ghana this year and worked on a song together, titled Practice. Have a look and listen:

The rapper earlier revealed that long-distance relationships are not something she would have considered if it was not with Vic Mensa. She went on to say that trust is difficult for her and she knows that there is a chance he may be hooking up with someone else and she would rather just not find out.

“I never would have considered a long distance relationship if it wasn’t with him. I can never trust him fully because a man is a man. He’s used to not having a sexual relationship with someone for years because he did that at a time in his life where he needed to,” she said to Slikour.

“I know how hard it is to be in a long distance relationship and I know that there’s a chance that he might be hooking up with someone else, I must just never find out,” she continued.

She thereafter gushed over the relationship the pair share, mentioning that she loves learning from him.

“I feel like our connection has been so strong, and so amazing and so exciting and informative. I like the fact that I’m dating someone that I can learn from,” she added.

Although the pair have broken up, they have not yet removed each other’s pictures from Instagram. Here is a look at their bae-cation in Mexico, as well as Vic Mensa’s visit to Johannesburg and Cape Town.