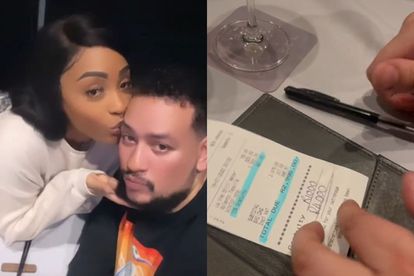 South African rapper Nadia Nakai shared a vlog of her date night with rapper boyfriend Kiernan Jarryd Forbes, popularly known as AKA, revealing his R1000 tip at The Test Kitchen Carbon in Rosebank – via a TikTok video on 3 August.

NADIA NAKAI AND AKA ENJOY A DATE NIGHT

Nadia Nakai took to TikTok to share a vlog of her date night with boyfriend AKA at Taste Test in Rosebank. The rapper shared videos of all the food they tried out and then videos of herself with AKA.

“Bae trying to tip them a thousand rand. I said hold up, wait, we gave them a good tip but not R1000.

However, Nadia thought he was “wilding out” and possibly convinced him not to. Take a look…

We went to eat at the Taste Kitchen in Rosebank

TikTokers weighed in on the R1000 tip in the comments section.

“I need a job at this restaurant… R1k tip,” wrote The Afternoon Tea.

“When I saw the bill???? like babe give me that money let’s go buy shop (Cause I would never),” wrote KatlegoTlhagane.

The Naaa Mean hitmaker was one of the panellists on Comedy Central’s The Roast of Khanyi Mbau and she was undeniably one of the most roasted people on the panel. So much so that some Tweeps called it the Roast of Nadia Nakai.

So, Nadia began trending on Twitter for the different roasts the other panellists threw at her. Take a look…

“Not Mpho saying Nadia Nakai has a body physique of a konka hubbly bubbly ???? he murdered her,” tweeted @AwandeMokoena.

Nadia acknowledged that she was trending over the roast and said that she loves it. Take a look…

“I’m trending…. And I knew it… had so much fun! Love you @MbauReloaded #RoastOfKhanyi,” she tweeted.