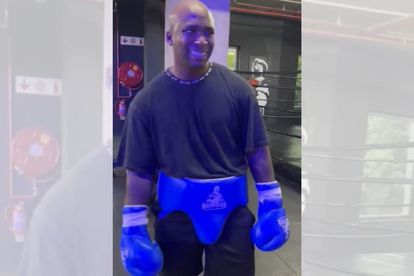 With just over two months to go to their boxing match, Naakmusiq and Cassper Nyovest are stepping up their game…

Both have been posting videos of their training sessions on social media. Of course, the music industry stars have also been trash-talking one another as part of their pre-match strategy.

Fans of the stars are also weighing in, offering their insight on who will win the fight scheduled for 9 April at Sun City’s Superbowl.

Not for the first time, Naakmusiq has been criticised for a video from one of his training sessions.

In a clip posted on social media, the actor and singer is see seemingly showing off his game face and his teeth to the camera as he struts around wearing his boxing gloves.

The clip was posted by DJ Switch this week who mocked the star over his actions.

He wrote: “Lol @NaakMusiQ bros are you modeling or acting for a role which one is it you not even sweating my man”.

The DJ also ridiculed Naakmusiq for wearing a pair of “large Huggies”, which was actually a groin guard.

Tweeps also weighed in, claiming they were unimpressed – and unconvinced that Naakmusiq would clinch a victory.

“This was so uncomfortable to watch. Naak will lose this one”

“Know what? My money is on @casspernyovest, Anga is clowning too much”

“Is he playing with us or he is really preparing?”

Csssper also caught wind of the clip, posting a savage comment directed at his opponent.

He tweeted: “He thinks it’s Generations here. Acting like this is a movie role. Hit that big bag until you have nothing left inside you!”

CASSPER TO GO ON MACG SHOW – IF HE LOSES MATCH

Meanwhile Cassper Nyovest has promised to appear on a guest of MacG’s Podcast and Chill, if he loses his match to Naakmusiq.

The rapper has previously vowed to “never” step foot on the controversial show, which usually trends for all the wrong reasons.

Responding to one tweep who challenged him to appear on the show, he tweeted over the weekend: “If I lose the fight with NAAK I will go on MacG’s podcast. If I beat Naak…I’ll never go on that show”.