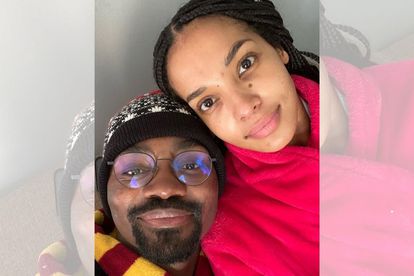 Musa Mthombeni has accused his new bride Liesl Laurie of “choking him in his sleep”. But it’s not what you think…

The medical doctor and the radio host have had their followers in hysterics with their honeymoon adventures, and Musa’s latest quip is just another example of their silly and playful relationship.

MUSA: ‘SHE TRIED TO KILL ME LAST NIGHT’

“She tried to kill me last night. I was sleeping and she blocked my nose,” the Vital Signs host joked of their bedroom escapades in an Instagram Story.

Liesl Laurie interrupts him with a laugh, sharing her version of events.

“He was snoring, so I just did this [pinches his nostrils] and then he almost had a breakdown. ‘Baby’s choking me in my sleep’”.

Liesl and Musa tied the knot in a small traditional ceremony last month and have their honeymoon has seen them enjoy everything from the Berg to the beach together.

From their drunken adventures to a winery to their polls on ‘who wore it better’, Musi and Liesl have had us thoroughly entertained during their honeymoon.

Their latest poll asks fans to vote on which breed of dog the couple should buy: “Liesl’s monster rat or Musa’s cute Pitbull?,” the biased star posted on his Instagram Stories.