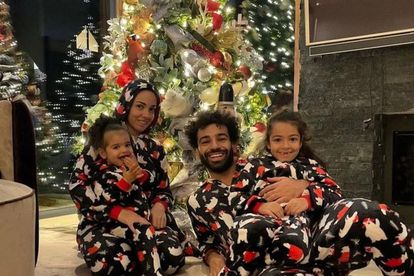 Mohammed ‘Mo’ Salah has faced a torrent of abuse from the Muslim community after he wished his followers a “Merry Christmas”.

In the social media post, Mo is joined by his wife Magi Sadeq and their two daughters Kayan and Makka. The family of four don matching Christmas pjs as they sit in front of a Christmas tree.

Mo – who practises Islam – has come under fire for the post, of which many claimed was “haram” (forbidden) in the religion.

Not for the first time Mo Salah shared his best Christmas wishes with fans.

The Egyptian-born soccer star, who plays for Liverpool, previously posted similar family Christmas portraits in 2019 and 2020.

It’s also not the first time Mo Salah has irked the Muslim community. Earlier this month he spoke to Egyptian talk show host Amr Adib in an interview that had fans riling.

When asked if he was ever tempted to drink alcohol (also haram), he claimed he “never felt the urge” to do so. The response was widely criticised as fans claimed Mo Salah failed to mention that Islam forbids alcohol in his answer.

Mo Salah faced widespread backlash from Muslim fans on Twitter who claimed it was a “sin” to acknowledge Christmas.

“For everyone who doesn’t understand we don’t try to ruin it for you. We still respect everyone, but its a sin to celebrate anything other than the 2 Eids and Ramadan”

“The God who gives you the fame and the money will also take it back from you. Respect your religion and don’t celebrate with other religions that have different thoughts and beliefs”

“Celebrating Christmas doesn’t make him a bad Muslim. Mo Salah is a great example of someone who creates bridges while not caring about the noise. The world needs more Mo Salahs”

“Religion is all about peace. It’s true that we all believe in different gods but don’t be like politicians who fight each other in the name of religion. We must always be there for each other. Learn to respect cultures of all religions”

The outspoken beauty queen – who challenged Mandla Mandela’s call to boycott the Miss Universe pageant – revealed that she had been personally insulted over her actions.

Responding to one tweep who called her a “prostitute b****” over her words, she replied: “I’m Muslim…of course a different type of Muslim than you who’s not fanatic, bitter and angry”.

Earlier this month, Sarah tweeted: “Merry Christmas to those who celebrate. I personally celebrate. I’m for the joys of holidays that bring families and people together. The more the better

In 2017, during the year of her reign, Sarah Idan was dragged for posting a picture with Miss Israel promoting “peace” at the Miss Universe pageant.

She was forced to flee her country following a national outcry.