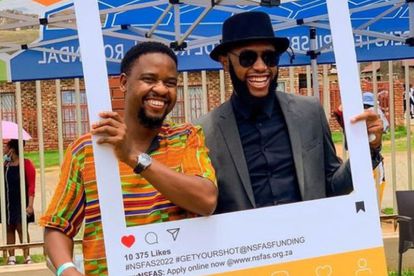 This after a Twitter account, Whistle Blowers RSA, as well as controversial celebrity blogger Musa Khawula claim that he is unduly benefiting from a National Student Financial Aid Scheme (NSFAS) social media campaign contract worth more than R5 million.

They also alleged that Mohale was “recruited into a sex ring” by his rumoured sugar daddy Kagisho Mamabolo, who’s a corporate services executive and spokesperson at NSFAS.

ALSO READ: ‘I bring nothing to the table besides my pretty face’: Mohale Motaung

Whistle Blowers RSA also alleges that the actor and media personality was awarded the R5 million tender by Kagiso Mamabolo as a new member of his sex cult and claims that he reportedly received the funds in January 2022.

The Whistle Blowers RSA Twitter account add that the “sex ring” allegedly came into being when former Department Minister of Higher Education and Training Mdu Manana had an affair with Mamabolo in 2013.

“It all started in 2013 when Mdu Manana, then department minister of higher education and training had an “After 9” affair with Kagisho Mamabolo. He gave him a job at NSFAS and both men started a “sex ring/circle.”

“Fast-forward to Jan 2022, Kagisho misused is power and influence at NSFAS once more to award a new member to his sex ring, Mohale, a social media contract”

“Mr Mamabolo is abusing his power at NSFAS to benefits his sex mates. He uses his NSFAS brand to recruit young men on his social media, mostly on his Twitter account, promising them money, jobs, bursaries, etc in exchange for sex with him and his mates.”

Fans of the media personality are also wondering if he’s being sabotaged before the 4 August premiere of his tell-all interview Mohale: On the Record on Showmax where he will spill the beans about his marriage to the Idols SA judge Somizi Mhlongo.

Speculations around how he is able to maintain his apparent lavish lifestyle were also swirling around. Take a look…

“How does he afford all of the Benz international trips where he stays all from being an influencer and being a DJ on that digital radio station and people will tell you how he’s from a well-off family.”

ZAlebs reports that Mohale has laughed off these bold claims on his social media account since the allegations came to light.