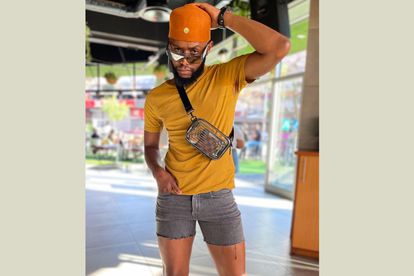 South African actor and radio personality Mohale Motaung is grooving his way into single life with a pair of barely-there shorts in a video posted to Instagram on Monday 18 October.

MOHALE SETTLES IN TO SINGLE LIFE

In August, audio clips between Mohale Motaung and the producers of Living The Dream With Somizi were leaked. The leaked audio clips revealed that Mohale’s estranged husband, media personality Somizi Mhlongo allegedly physically and psychologically abused him.

Mohale detailed an experience of when he was threatened with a knife.

“I took my keys and walked out, he took a knife. I was about to exit, so he said to me, ‘if you exit… I’m going to kill us both.’ So I took my keys and ran. He grabbed the knife and said ‘if you walk out, I’m going to stab you.’ Now I see a different person. I was sh*t scared and walked back into the house. He said ‘let’s talk.’ He cried and we moved on,” said Mohale in the leaked audio clips.

Since then, Mohale and Somizi have confirmed that they are getting divorce via personal statements posted on Instagram. However, the pair appear to be the happiest soon-to-be divorced couple… ever.

Both Somizi and the Rockville star have been taking vacations, making appearances and so much more! In the latest video posted to the actor’s Instagram, he is sharing the stage with musician Makhadzi.

MOHALE SHARES THE STAGE WITH MAKHADZI

Mohale, who adores the Ghanama hitmaker, celebrated her album reaching a million streams. In videos posted to his Instagram, Mohale is seen dancing in a super shirt pair of shorts.

He looked like he was having the time of his life in the build up, to the third frame where Makhadzi joined him.

Instagrammers were quick to notice that women in the audience were trying to touch Mohale as he danced. Taking to the comments section of the post, many brought up the travelling “hands” in the video.