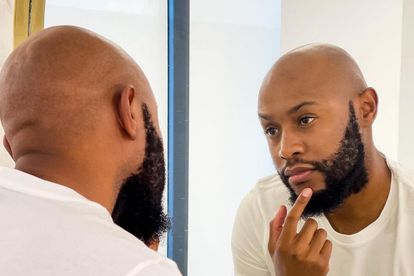 Actor and radio personality Mohale Motaung said he would rather mop the ocean than go back to his ex via a tweet on Wednesday 11 May and many believe he is talking about his estranged husband Somizi Mhlongo.

Mohale Motaung seemingly threw shade at his estranged husband Somizi Mhlongo on Twitter. He retweeted a post that said “go back to your ex.”

His response was “mopping the ocean >>>” which implies that he would rather mop the ocean than go back to Somizi.

This comes after the fifth season of Somizi’s reality show Living the Dream with Somizi aired on Showmax on 4 May. The media personality made the following bombshells,

DOES THE ACTOR WANT 50% OF HIS ESTRANGED HUSBAND’S ESTATE?

Controversial blogger Musa Khawula claimed Somizi was dividing his estate between himself, his daughter Bahumi and his “baby mama” Palesa Madisakwane.

“Somizi Mhlongo has registered 3 beneficiaries under his estate. He registered his baby mama Palesa, Bahumi and Mohale Motaung in a bid to dilute and shrink what Mohale might claim during their divorce settlement. Mohale demands 50% of Somizi’s estate,” he tweeted.

Mohale first laughed off the claims.

Thereafter, he asked his 671 800 Twitter followers to give Musa his number so he can at least report on factual news.

“E fang [give] Musa Khawula my number – so that he can at least report factual news?” he tweeted.