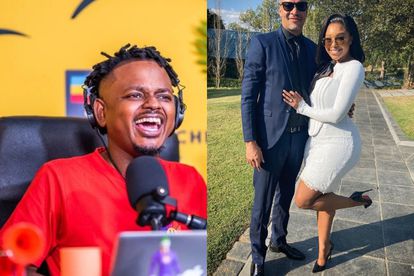 Controversial podcast host Macgyver Mukwevho, popularly known as MacG, set tongues wagging on Twitter when he claimed that media personality Minnie Dlamini is no different to dancer Zodwa Wabantu, via an episode of Podcast And Chill on Thursday 12 May.

MACG: ‘THERE IS NO DIFFERENCE BETWEEN MINNIE AND ZODWA’

MacG set tongues wagging on Twitter when he made a controversial comment on media personality Minnie Dlamini. He claimed that she is no different from controversial dancer Zodwa Wabantu, who is known for often showing a substantial amount of her body and crowd surfing in G-strings.

MacG’s comments come after controversial entertainment blogger Musa Khawula claimed that Minnie cheated on her estranged husband Quinton Jones with businessman Edwin Sodi. Minnie slammed these rumours as “false and damaging” but that did not stop MacG from slamming her on an episode of Podcast and Chill on Thursday 12 May.

“There is no difference between Minnie and Zodwa Wabantu. They’re both selling p*ssy. One owns it, one doesn’t. Do you get it? And that’s where my issue is. If you’re selling p*ssy, just say yeah, I’m selling p*ssy that’s how I get my sh*t,” he said.

“But does she owe anyone an explanation though?” asks the Ghost Lady.

“She does because she paints herself as this saint and as this person who works hard for her money. Imagine how many girls want to be like Minnie Dlamini or Mihlali? They’re selling false dreams,” he continued.

ALSO READ: Who is Minnie’s rumoured ‘side guy’? 4 things to know about Edwin Sodi

Twitter users were not impressed by the podcast host’s comments. Take a look…

“MacG is abusive! Whoever is laughing at this I hope you don’t have daughters/sisters (because) you wouldn’t like to hear someone speak this way about them. This is distasteful. I love MacG but this here is abusive and out of line. No human should disrespect another human like this,” tweeted @Star80010.

“Nah I think @MinnieDlamini really needs to sue this boy and be serious about the lawsuit. This is way out of line and damaging to her brand. It’s high time South Africans take a lawsuit seriously or atleast take their brand seriously. If Minnie doesn’t sue MacG for this hai I give up,” tweeted @sewelankoana.