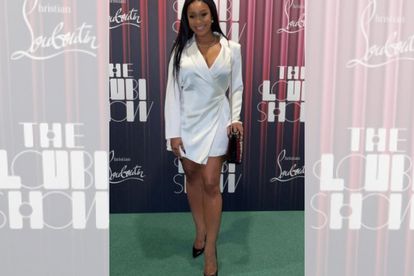 There’s no mistaking it, Minnie Dlamini is positively glowing!

Weeks after announcing her marriage split, the TV presenter and actress has arrived in Paris for a stint at Fashion Week.

From mingling with the legendary Christian Louboutin, to spotting Anna Wintour to even walking the catwalk herself, Minnie has an action-packed diary ahead of her.

To top that off, the star looks incredible – and fans think it has to do with her new single status.

Taking to Instagram, Minnie Dlamini met with a man women around the world idolise – Christian Louboutin, the founder of the famous Louboutin footwear.

In one post, the mom-of-one even had a chat with the luxury designer.

“Mr Red Bottom himself telling me all about his new AW22 collection”, she boasted.

And Minnie’s fans, including celebrity pals, were seeing green.

“I hate you! Why am I not there with you?” asked Unathi, whilst Kwa Mam’Mkhize star Shauwn Mkhize said: “You bring them red bottom for your sister”.

Meanwhile, Minnie Dlamini is scheduled to walk in a Jessica Jane fashion show on Friday, 4 March at the Ritz in Paris.

Sharing a pic of her embracing the star, she wrote: “She’s held my hand right from the very beginning & taken me along with her & now she’ll be holding my hand in Paris too”.