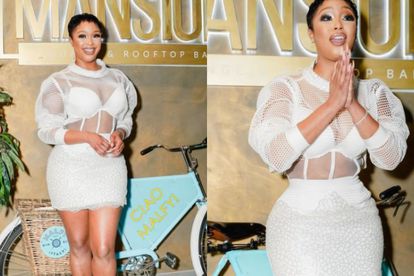 Media personality Minnie Dlamini is allegedly not the owner of the new lounge called The Mansion which she launched on Friday 9 September according to a report by City Press.

MINNIE DLAMINI IS ALLEGEDLY NOT THE OWNER OF THE MANSION

City Press reports that Minnie Dlamini is not actually the owner of the new establishment The Mansion which she launched on Friday 9 September. The publication reports that the lounge is owned by Hugo de Villiers Mouton and Jan Boot.

The Mansion was registered as a business entity under the name The Mansion Lounge and Rooftop Bar on 24 November according to company registration CIPC records seen by the public. Boot and Mouton are listed as the only two directors.

Minnie is reportedly the face of the establishment. However, she owns a total of 10 businesses that she is listed as director of. Four of the 10 companies are deregistered or in the process of being deregistered.

This comes after Minnie said she the establishment was her latest business venture in an Instagram post. Take a look…

“Spring is the season of rebirth, so I saw it only fitting that I introduce you to my latest business venture @themansionsa. After a few years of turmoil in the industry because of lockdown I want the space to be a place where we put money in the pockets of our artists by booking incredible DJs and performers,” she wrote.

“And celebrating the best of our incredible entertainment industry. It’s all about the vibes at the Mansion ????,” she continued.

The Mansion is located in Centurion.