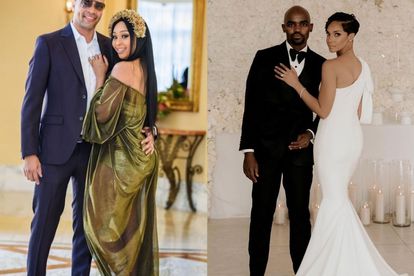 Medical doctor and entertainer Musa Mthombeni was dragged into actress Minnie Dlamini’s cheating rumours as she trends on Twitter today (10 May).

Controversial entertainment blogger Musa Khawula claimed that actress Minnie Dlamini cheated on her estranged husband Quinton Jones. The rumours have surfaced amid their divorce. Minnie allegedly does not want to sign the papers. Take a look at the allegations…

“Rumour has it Minnie Dlamini had been cold towards Quinton Jones after her brother’s passing, shortly after the brother’s passing Quinton found out Minnie was cheating on him and filed for divorce. The divorce is on-going, apparently Minnie is refusing to sign the divorce papers,” tweeted the controversial entertainment blogger.

Tweeps were under the impression that men who love too much will eventually be cheated on.

TWEEPS: ‘NEVER BE TOO IN LOVE’

Twitter users then dragged Musa Mthombeni into the cheating rumours because he is known for loving his wife, former Miss SA Liesl Laurie-Mthombeni boldly.

“After seeing that Minnie Dlamini allegedly cheated on her ex husband. I cried. I’m now praying for Dr Musa and the rest. Never be too nice or too in love with a woman 💔. Our brothers need to learn that showing a woman too much love will only result into her leaving or cheating,” tweeted @bigxhosa_.

Other Tweeps also agreed and thought Musa is a good man but they believe he may be cheated on.

“Good guys like Quinton Jones and Dr Musa have bad luck of cheating women. Once a woman know that she’s the only one she will cheat!! Woman must not trust you!! Keep her on her toes. Umfaz must Detective and have trust issues!! She won’t find time to cheat!’ Keep her busy!!,” tweeted @ChrisExcel102.