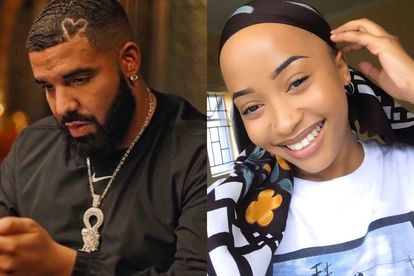 ‘He’s in love’: Mihlali gets trolled after Drake tags Uncle Waffles on his IG .Images via Twitter @maysadlamini_and @sadpiitt

‘He’s in love’: Mihlali gets trolled after Drake tags Uncle Waffles on his IG .Images via Twitter @maysadlamini_and @sadpiitt

Beauty vlogger Mihlali Ndamase – who’s openly had a crush on Canadian-born rapper Drake for years is being dragged on Twitter after the rapper tagged amapiano DJ – Uncle Waffles on his Instagram story again.

The rapper has been following the popular DJ and has been making appearances on the DJ’s Instagram Live, and tagging her on his Instagram stories.

Drakes’s crush and media personality – Mihlali Ndamase was trolled this morning after popular amapiano artist and DJ – Uncle Waffles took to Twitter this morning to react to the rapper tagging her on his Instagram.

“Drake just mentioned me on his story. I’ve been screaming for 10 minutes.”

The internationally acclaimed rapper Drake had social media buzzing again this morning when he replayed her video on his story with emojis and tagged her.

The rapper has been following the amapiano artist on Instagram since she became a hit last year (2021).

Mzansi and Waffles’ fans also jumped on entertainment blogger Musa Khawula’s post about Drake and the DJ with many stating that the rapper is romantically interested in the DJ.

Black Twitter president @ChrisExcel also trolled the beautician who’s had a crush on Drake since 2019.

“One thing about men. They get turned off by groupies.”

“Men don’t like easy targets Look how Drake ignored Mihlali for 5 years not even a follow back nyana.”

MIHLALI’S CRUSH ON THE RAPPER

Mihlali Ndamase took her Drake obsession to a new level on Thursday, 16 January 2020 when she posted a photoshopped pic of herself and the rapper getting married traditionally.

Now fans are letting her know that her obsession probably turned him off and that Waffles got his attention because she never mentioned him to get a follow on social media.