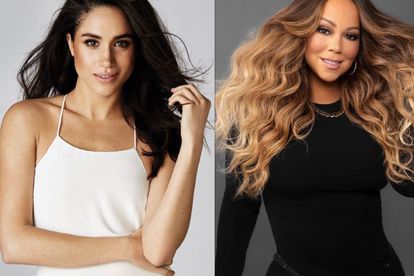 Duchess of Sussex Meghan Markle sat down with iconic pop artist Mariah Carey to talk about racial struggles on the second episode of her Spotify podcast Archetypes which released on Tuesday 30 August.

MEGHAN WAS INSPIRED BY MARIAH BECAUSE SHE’S MIXED RACE

The Duchess of Sussex explored the meaning of the word diva on the latest episode of her podcast Archetypes. This is the second episode of Archetypes, titled The Duality of Diva with guest star Mariah Carey.

The duchess thought “oh my gosh. Someone who looks like me,” when she first came on the music scene.

Meghan went on to say that she was only treated like a black woman when she started dating Prince Harry. She says this is because she is light skinned.

Carey responded saying that as a mixed woman, people want you to choose what you are.

The discussion of race comes after Meghan claimed that she didn’t want her children photographed because of racism – in an interview with The Cut.

ALSO READ: Meghan Markle: Source says there WAS a fire, but a small one