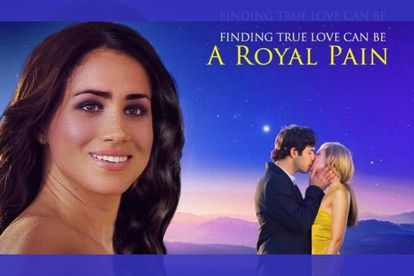 If you think your eyes were deceiving you, it was not! It really is the Duchess of Sussex, Meghan Markle, starring in the 2013 romantic comedy, Random Encounters, now playing on e.tv’s eMovies.

It is well known that before Meghan became the Duchess of Sussex, the actress starred in a range of films and movies, most notably in the legal drama, Suits.

As for Random Encounters, Refinery notes that Meghan is not the star of the film (that particular honour goes to Abby Wathen as Laura and Michael Rady as Kevin).

The movie is actually really about Meghan’s best friend, who ends up meeting someone the old fashioned way (spilling coffee on his shirt) before letting him slip away.

Most of the movie is about tracking him back down to see if it really was love and first sight, while Meghan chimes in with sassy phrases and jokes.

James Croot writes for Stuff that the film is “basically a song and charisma-free, low-budget version of La La Land” and is difficult to watch in the #MeToo age.

Meghan – who plays Mindy – enters the fray early on, rocking the first of a succession of strapless dresses.

We quickly learn that she has plenty of male friends more than happy to have sleepovers and that they come from a range of occupations. She is also the one who initially offers a withering assessment of the main character’s shortcomings.

However, Croot notes that there are a couple of encounters that “might not leave one amused”.

“On the subject of meeting gay men, Mindy suggests that while ‘it’s an exercise in futility…it’s not inconceivably irreversible’ and, claiming to be a size 2, Mindy says she always wears a size zero because ‘it’s got to feel like it needs to be ripped off’.”

About the rom-com Random Encounters

But, the more troubling parts of the rom-com according to Croot, are actually the lengths Kevin goes to to reunite with Laura. With the help of his agent friend Ted, he sets up targeted “auditions” to try and lure Laura into meeting him again.

“An already somewhat unsettling premise for the viewer isn’t helped by Ted’s query that, ‘Do you think it would be weird if I had callbacks at my house?’. And this is at the same time Laura’s ‘dinner meeting’ with the British director of a project she’s interested in goes south because she rejects his advances.”

Croot further notes that the film is not in Meghan’s favour and seems like the “poster child for everything that everyone has had is wrong about Hollywood in the past year’s exhumations of the industry’s demons”.