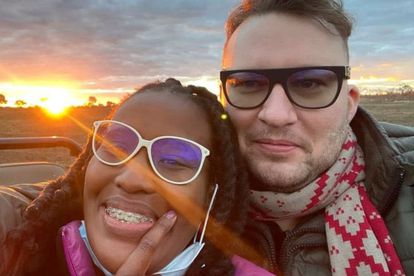 Award-winning actress Masasa Mbangeni, who is known for her Scandal! role as Thembeka is reportedly nursing a broken heart after her breakup with The River co-creator Gwydion Beynon.

Friends of the former Scandal! actress Masasa Mbangeni and The River producer Gwydion Beynon informed Zimoja that they were a picture-perfect couple, who attended awards together, and even went public about their relationship until it ended in tears a few months ago.

“She was a heartbroken shame. It ended badly and abruptly, and she wasn’t handling the breakup. They got too excited too soon, maybe,” says the friend.”

Friends of the former love birds also reveal that things went south for the couple when Mbangeni quit her job as a drama lecturer.

“S*it hit the fan when she quit her job as a Drama lecturer and went back to acting. That’s where the danger was. Acting is frustrating because there is no sustainable income in South Africa,” the friend adds.

“She should go abroad. I think that got to Gwydion. The fact that she wasn’t really working. But they looked so good together and we thought they would eventually get married because they had met each other’s families.”

The friend also tells Zimoja that the talented actress has recovered but won’t be dating anytime soon.

“But I doubt she will be dating anytime soon, But I hope he at least gives her work in one of their productions, but I highly doubt with the way things ended.”

Beynon and his business partner Phathu Makwarela, who’ve written for Gomora, The Queen and also created Giyani: Land of Blood, The River and Legacy told TVSA in 2019 that they met thirteen years ago on the set of Muvhango.

“We met at Muvhango, about thirteen years ago. We were both so young and inexperienced! I was already employed as a researcher, a storyline, and a scriptwriter. Gwyd came on board as a storyliner. We didn’t like each other much at first, but then we slowly started to realise that we both shared a real passion for storytelling. We started working on stories together, and found that we had complementary skills, and enjoyed working together,” says Makwarela.

The pair have down as Mzansi’s first-ever celebrity TV scriptwriting team and became popular in 2019 when their telenovela The River won 11 Golden Horns, including the Best Scriptwriting category.

The former couple Masasa Mbangeni and Gwydion Beynon were unavailable for a comment at time of publishing this article.