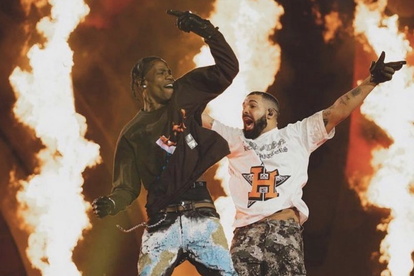 One festival goer is suing Travis Scott and Drake. Image via Twitter: @rapalert4

One festival goer is suing Travis Scott and Drake. Image via Twitter: @rapalert4

According to the 23-year-old, Drake joined Travis Scott on the stage and the two continued performing despite cries for help from crowd members.

Kristian Paredes from Austin Texas is demanding $1 million (just over R15 million) from American artists Travis Scott and Drake. Paredes claims that he was left “severely injured” by the large crowd of people who attended the Astroworld festival that took place on Friday 5 November.

According to a lawsuit filed by Paredes, Drake came on to the stage with Travis Scott to perform in front of the “out-of-control” crowd and continued performing even after people in the crowd started collapsing.

Paredes says that he was standing near the VIP section when Travis announced his performance would start. Shortly after he got onto the stage, crowds of people stormed the VIP section resulting in chaos.

The lawsuit also states that people begged the security guards for help, but their cries went unheard by officials at the NRG stadium who just wanted the show to continue.

Daily Mail reports that Paredes claims to have permanent bodily injuries and wants the rappers to cover his medical bills.

Meanwhile, Scott issued an apology on Twitter while adding that he will be helping out with medical and funeral costs.

His fiancée, reality TV star Kylie Jenner, also issued a statement claiming that they had no idea that people had died which is why he continued performing despite cries for help.

She was also criticised heavily for taking videos of an ambulance leaving the festival.

Kylie, who attended the event with her daughter Stormi, was seen in various clips being rushed out of the festival by a large number of security officials and reportedly were not harmed by the stampede.