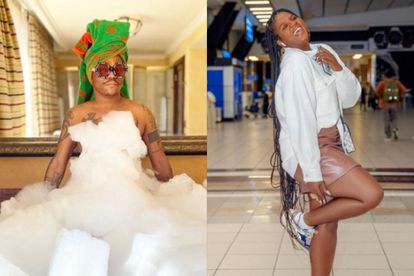 Royal AM owner Shauwn “MaMkhize” Mkhize made a special appearance on media personality Somizi Mhlongo’s reality show on the latest episode which aired on Wednesday 21 June.

Somizi Mhlongo joined MaMkhize on a night out at Max’s Lifestyle – a bar in the township of Umlazi in KwaZulu-Natal. On the reality show, the pair are seen getting ready but MaMkhize appears to be upset at Somizi for not meeting her.

“We have something important to fix, but you’re busy doing your makeup and attending parties. Parties can wait. What about this important thing?” she says to the media personality.

It seems the reason they meant to meet was for MaMkhize to help Somizi with his divorce settlement, or unsettlement as he calls it.

“Can I come on Monday? On Monday I’ll bring the documents and everything. Let’s do it on Monday, please?” he asks before explaining that he came to Durban straight from his trip to Cape Town.

“We were discussing how we need to fix my issue with the lawyers and SARS and stuff. She’s really helping me a lot in terms of my divorce settlement… or unsettlement rather,” he said.

THE MEDIA PERSONALITY CALLS OUT MAMKHIZE FOR HELP

This comes after Somizi previously asked MaMKhize for her tax and divorce lawyers because he had trouble with both.

“I need you to connect me to the person… your tax lawyer. Because they’re after me now,” he asked.

“Are they also after you? I will send it to you fast and furious,” she responded.

The Idols SA judge then revealed that he got a letter from his estraged husband Mohale Motaung. So, he needed a divorce lawyer because Mohale wanted to claim half of his estate.

“I just got a letter from my ex’s lawyers. So, I also need a divorce lawyer. The person to speak to right now is Shauwn because I think she’s been through both situations and she’s used very good lawyers,” he said.

“I’m sending it to you fast and furious. So they get onto it while you’re there (Cape Town),” she replied.

“Imagine, he wants half,” he continued.