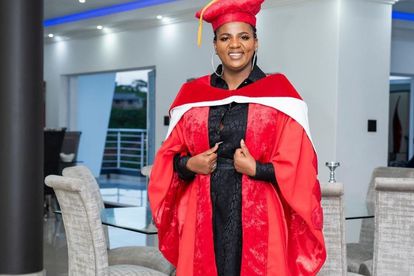 Businesswoman and football club owner Shauwn “MaMkhize” Mkhize took to Instagram on Saturday 27 November to announce that she was awarded an honorary doctorate and she should be addressed as “Dr President Shauwn Mkhize”. In an interesting turn of events, it has been reported that the college that awarded her the doctorate is not registered. with the Department of Higher Education.

In true MaMkhize style, the businesswoman celebrated her honorary doctorate with a bang. She was “awarded” the doctorate by the Shepard College of Religion, Culture and Training. She and her sister both strutted their stuff in their bold red gowns on Instagram.

MaMkhize’s family and friends hosted a celebratory dinner for her. “I’m so grateful for the immense love they showered me last night was so heartwarming.”

“The greatest gift you can ever give somebody is showing up for them and boy, oh boy, did they show up for me.”

TAKE A LOOK AT HER CELEBRATIONS HERE

In an interesting turn of events, it was revealed that the Shepard College of Religion, Culture and Training has not been registered. IOL reported on Thursday 2 December that the college that awarded MaMkhize her honorary doctorate is not registered with the Department of Higher Education.

The publication spoke to the Department of Higher Education and Training spokesperson, Ishmael Mnisi who confirmed this.

“Kindly note that the Good Shepherd College of Religion and Training is not registered with the Department as a private higher education institution. We are currently investigating.”

The publication further reports that the institution could not be reached for comment.

‘SHE MUST JUST BUY THIS COLLEGE’

Mzansi had several reactions to the news with one Twitter user saying she should “just buy this college and turn it into a university.”

Another wrote: “Leave MaMkhize alone. She just wants to be happy. Let her be.”

“She’s going to buy it and then get it registered. Check Mate.”