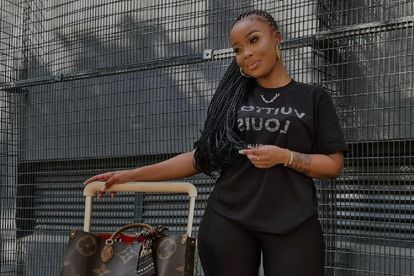 The mom-of-three, who flew to Turkey to get a new smile and new body in August, took to social media to post her new whip as fellow musician DJ Kotini congratulated her for her “hard work”.

However, tweeps are not buying the “hard work” story, as they believe she received a handsome payoff from Royal AM president and millionaire Shauwn “MaMkhize” Mkhize to never talk about the abuse allegations she levelled against her son, Andile Mpisane.

In her social media post, Sithelo is snapped next to and inside her luxury car. The Forever hitmaker is dressed in Louis Vuitton from head to toe in the various pictures.

“All your hardwork is finally paying off. Congratulations ma bby [sic] I’m so proud of you,” he wrote.

DJ Kotini’s post raised a lot of eyebrows as tweeps denounced Sithelo being a hard worker, saying MaMkhize must have paid her well.

In July this year, Sithelo shared shocking images and clips on her Instagram Stories relating to allegations that her ex-boyfriend and baby daddy Andile Mpisane physically and verbally abused her and caused her miscarriage. However, she later deleted her posts.

The former couple has two girls together; Florence “Flo” and Likuwe “Coco”. Mzansi learned of their break up in December 2021 when the Makhwapheni hitmaker married Royal AM Ladies deputy chair, Tamia Mpisane, with whom he now has a baby girl named Miaandy.

MaMkhize, whom Sithelo claims knew about the alleged abuse, denied the allegations. While the musician and Royal AM chairman requested a paternity test on both his daughters with Sithelo – according to Sunday World.

A month later, Sithelo was in Turkey to get new teeth and undergo plastic surgery, including a Brazilian butt lift (BBL). And now with her new car, tweeps believe her “soft life” is because of MaMkhize’s money.