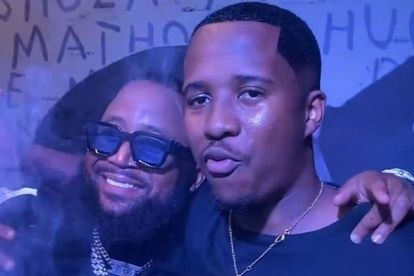 The radio personality and his team; which includes the outspoken Sol Phenduka and the mysterious Ghost Lady returned to their YouTube show for the first time in 2022.

And to kick off the New Year, MacG has dropped several bombshells about Cassper Nyovest and Andile Mpisane which has the social media completely shocked.

According to MacG, Cassper Nyovest and Andile Mpisane are “smashing” the same women; Thobeka Majozi and Kamo Mphela.

Thobeka is an influencer and the mother of Cassper’s only child Khotso. Khamo is a popular dancer and ampiano hitmaker.

MacG claims that the McLaren owners are “sharing” the same women. This despite the fact that Andile Mpisane is married to Tamia Louw, who is reportedly expecting twins with him.

He claims that Thobeka being MIA at Cassper’s all-white party and the rapper.

He said: “Bro you know these celebrities…it’s wild out there.

“He [Andile Mpisane] is allegedly smashing Cassper’s wife [Thobeka]…and Cassper is apparently smashing Kamo Mphela who he [Andile] was smashing. They swapped”.

Meanwhile Cassper Nyovest has responded to MacG’s claims on Twitter. The Billiato creator responded to followers who asked him what his opinion on the show was.

He replied: “ Niggas really don’t give a f**k hey. I try my best to keep my family away from the bulls** and the lies but still. The worst thing is you can’t do anything about it.

“Just gadda take it by the chin and keep it moving. Let live and let God deal with it.