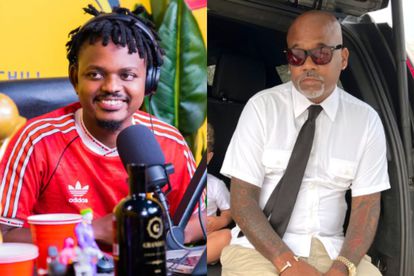 Dame Dash appears on an episode of ‘Podcast and Chill’. Images via Instagram @macgunleashed @duskopoppington.

Dame Dash appears on an episode of ‘Podcast and Chill’. Images via Instagram @macgunleashed @duskopoppington.

Twitter users praised MacGyver “Mac G” Mukwevho and Sol Phenduka for their interview with Damon Anthony Dash, popularly known as Dame Dash on an episode of Podcast and Chill on 25 August.

Entrepreneur, and co-founder of Roc-A-Fella Records appeared on an episode of MacG’s Podcast and Chill. The interview was virtual and covered Roc-A-Fella, Kanye West, Jay-Z, Aaliyah and gangsterism.

Dame Dash dated late singer Aaliyah leading up to her death in 2001. They were serious and planned to get married one day. Aaliyah passed away at the age of 22 in an aeroplane accident in the Bahamas – on 25 August 2001.

He said that Kanye is a true artist because he does not do it for the money.

“If it’s a choice between Jay[-Z] and Kanye, I’m going with Kanye. All day everyday,” he said.

“He’s more creative, you know. Now I can speak on that because I worked with both of them, right. You know, Kanye is a true artist and he does it for the art and Jay-Z does it for the money. It’s two different things,” he continued.

Twitter users have praised MacG and Sol Phenduka for their interview with the music executive. Take a look…

“MacG has now gotten another big international name Dame Dash on Podcast and Chill???? to discuss Kanye West and Jay-Z beef amongst other things. That is why bo cassper nyovest???? have chest pains when they hear MacG/Podcast and Chill,” wrote @Moshe_Seaneho.

“Interviews like Dame Dash show you just how talented Mac and Sol are, he was very closed off at the beginning and started giving a whole more towards the end because of how comfortable the hosts made him. I don’t think you can teach that,” wrote @Kgaugelo_Sel.