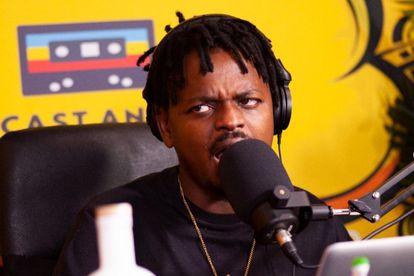 MacG has officially broken his silence on the Twitter debacle surrounding his interview with US singer Ari Lennox.

The outspoken star took to his controversial podcast to tell his side of the interview snippet which went viral on social media.

In the clip between MacG and Ari Lennox, he asks the singer a question about her sex life, referencing a song lyric – to which she reacted in shock.

Now MacG is responding to the debacle, claiming his question was “taken out of context”.

Speaking on his podcast, MacG claims that he was confused about how the Ari Lennox interview created such a ruckus.

The 33-year-old DJ claimed that the interview took place last year, and that he almost didnt take it.

“She’s liberated, we love sex, we have something in common”, he added.

MacG claims that he had “read the room”, before he asked the question. He also claims that he mentioned Ari Lennox’s Tiny Desk performance, in which she performed the song in question, titled Pop.

“Here is an artist who glorifies her sexuality so for me that was my entry part. It’s not like I asked Oprah; ‘Who you f**king right now?’”.

He also claims he would never had mentioned that comment, if she had not originally said it. He continued: “That’s distasteful. But those are lyrics from her own song. So I’m playing on that”

MacG also insinuated that other media corporate companies were trying to “sabotage” him. Mac G also claimed that other industry rivals were paying Twitter influencers to tarnish his reputation.

He added: “Every week you go on Twitter you find all this propaganda who make it seem like I’m a bad person; misogynistic and vile…You’ll never see the good things we do trend. The negative stuff will make us unattractive to advertisers.

“The nature of our podcast is uncensored, we ask anything”.