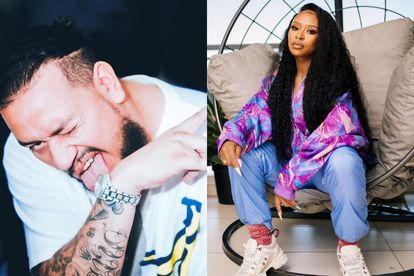 MacG recalls a huge fight between DJ Zinhle and AKA. Images via Insatgram @akaworldwide @djzinhle.

MacG recalls a huge fight between DJ Zinhle and AKA. Images via Insatgram @akaworldwide @djzinhle.

Controversial podcast host MacG recalled a time he was interviewing DJ Zinhle and she was in the middle of a fight with her ex-boyfriend, rapper AKA as he defended himself for the Ari Lennox saga on Monday 24 January.

THE MACG AND  ARI LENNOX SAGA

Ari then slammed MacG on Twitter but she thereafter deleted the tweets.

MacG defended himself saying he was only asking Ari the question because of a lyric from her song.

“Here is an artist who glorifies her sexuality so for me that was my entry. It’s not like I asked Oprah; ‘Who you f**king right now?’” he said.

MACG ON DJ ZINHLE AND AKA

MacG brought up a fight between DJ Zinhle and AKA in light of the drama with Ari. He explained that he respects people’s privacy. So, to prove that he spoke about a time he was interviewing DJ Zinhle and she got into a fight with her ex-boyfriend and father of her child AKA.

MacG said that the fight took place while the cameras were rolling. So, everything was caught on camera but he choose to delete the footage to respect their privacy.