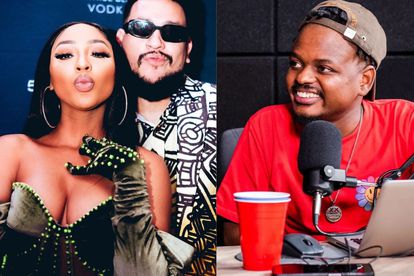 Controversial podcast host Macgyver Mukwevho, popularly known as MacG, expressed that he thinks rappers AKA and Nadia Nakai’s relationship is a publicity stunt – on an episode of Podcast and Chill which aired on Monday 25 April.

MACG WEIGHS IN ON AKA AND NADIA NAKAI’S RELATIONSHIP

AKA and Nadia Nakai sparked romance rumours in December 2021 when Tweeps thought they went on a “baecation” together. The pair then went “Instagram official” in March this year but unfollowed each other on Instagram after a “date night” In Accra, Ghana.

Many slammed Nadia for getting into a relationship with AKA because he was accused of allegedly abusing his former fiance – the late Nelli Tembe. MacG on the other hand does not think the pair’s love is real, but instead a “publicity stunt.”

The podcast host that their relationship made no sense to him, because the pair do not seem to have “chemistry.”

“For me it’s weird, it makes no sense. To me, it strikes me as one of those arranged publicity stunts because when I watch them there’s no chemistry,” he said.

ALSO READ: ‘Nadia is letting Nelli & other women down’: Tweeps weigh in on AKA

TWEEPS WEIGH IN ON MACG’S COMMENTS

Some Twitter users agreed with MacG and also thought the pair had no chemistry. Take a look…

“MacG is right Nadia Nakai and AKA have no chemistry nje. Ingathi someone forced them to date #PodcastAndChill,” tweeted @Pheliswa_S.

Others thought it was “too soon” for the rapper to move on after the death of Nelli.

“I know this AKA and Nadia this isn’t my business…. But personally I feel it is too soon. Imagine his dead EX father and family watching all this on twitter,” tweeted @obie9octavious.