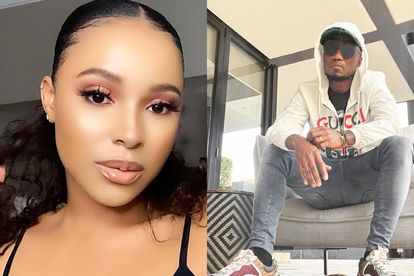 Lizelle Tabane served former soccer player Teko Modise with a letter of demand after he claimed she falsely accused him of abuse in an episode of Podcast And Chill with MacG on 9 December.

LIZELLE SERVES TEKO WITH A LETTER OF DEMAND

Teko Modise claimed Lizelle Tabane falsely accused him of abuse a few years ago – on an episode of Podcast And Chill on 9 December.

Lizelle served the former Orlando Pirates player with a letter of demand. Teko needed to have retracted his statement on Podcast And Chill and social media by today (14 December) but he has not done so.

2. LIZELLE IS A MODEL

Lizelle has reached what many may call “influencer” status on Instagram because she has a total of 153 000 followers.

4. LIZELLE IS RUMOURED TO HAVE DATED JULIUS MALEMA

The model is rumoured to have dated Economic Freedom Fighters (EFF) leader Julius Malema back in 2011. She reportedly accompanied him on a trip to Mauritius.

Teko and Lizelle had an on and off relationship since 2013 but finally called it quits in 2015. The pair reportedly got engaged in 2013 and Teko paid lobola for her, but he wanted his lobola returned after they broke up.

The model is a mom to a son. Lizelle previously posted several heartfelt messages to her son but has since removed these posts from her Instagram.