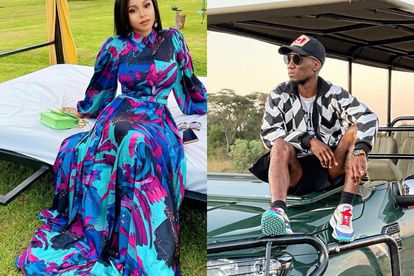 Model Lizelle Tabane announced that she served her ex-fiancé, former South African soccer player Teko Modise with a letter of demand, via an Instagram post today (13 December) – after he claimed she falsely accused him of abuse.

TEKO MODISE CLAIMS HE WAS FALSELY ACCUSED OF ABUSE

Teko Modise and Lizelle Tabane were in an on and off relationship since 2013. The pair got engaged the same year and the former soccer player paid lobola for Lizelle. When things went south, Teko reportedly demanded her family pay back the lobola.

Teko was accused of physically abusing Lizelle in 2014. The former footballer claimed that Lizelle used old pictures, from someone else who abused her to accuse him of abuse.

“It was scary because at the time I was still having endorsements. It was very toxic for me. She is a beautiful person, a beautiful woman,” he continued.

Lizelle has since fired back at the footballer, affectionately known as “The General”. Taking to Instagram, the model announced that she is serving Teko with a letter of demand for his allegations on the podcast.

Lizelle demands Teko publicly retract the allegations against her on Podcast And Chill and other social media platforms by Tuesday 14 December.

Read the full letter below.