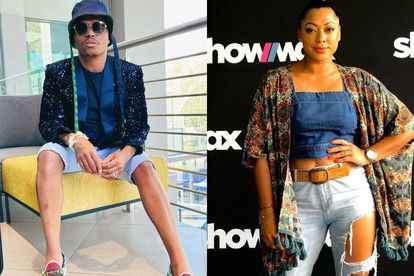 Lorcia Cooper features on an episode of ‘Living the Dream with Somizi’. Images via Instagram @somizi @lorcia1cooper.

Lorcia Cooper features on an episode of ‘Living the Dream with Somizi’. Images via Instagram @somizi @lorcia1cooper.

Media personality Somizi Mhlongo was asked a burning question – “did you hit him?” by his friend, actress Lorcia Cooper – in the first episode of the fifth season of his reality show which aired on Showmax on Wednesday 4 May.

LORCIA COOPER: ‘DID YOU HIT HIM?’

The media personality made bombshell revelations such his sex life with Mohale “wasn’t great” and he there were times where he wasn’t sleeping at their home.

The other bombshell was Somizi’s friend, actress Lorcia Cooper directly asking Somizi if he hit Mohale, which can be seen in the trailer of the series.

“Did you hit him?” asked Lorcia.

HOW DID SOMIZI RESPOND?

Lorcia brought up the allegations by asking how much of it was fabricated and the media personality said it took two to tango.

“How much of that was fabricated?” asks Lorcia about the allegations made against Somizi.

“All I can say is it takes two to tango. For me, his biggest issue is that if I’m going to wake up today and say I am innocent all the way then it means I have been mastrubating all this time. I have been in this relationship on my own,” he responded.

“He lost me when, oh he had no part in anything,” he continued.

Somizi did not immediately respond but Lorcia continued by saying it is so hard to have this conversation with someone you love.

“It is, but also for me, it is also not even about did I hit him or did I not hit him? People look at the reaction and what caused the reaction,” he said.

So, the Idols SA judge did not directly answer Lorcia’s burning question.