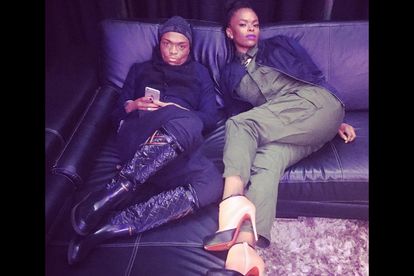 SOMIZI: ‘THEY ATTACKED ME AND I WAS QUIET’

Somizi Mhlongo performed a traditional ceremony on the season finale of his reality series. He said he would proudly show off his goat skin bracelet when he returns to Idols SA.

“I start shooting Idols next week, I’m going to show this off (traditional bracelet),” he said.

Somizi was then asked why he got others fired by what appears to be a family member. This was most likely in reference to Unathi Nkayi and Randall Ambrahams exit from the singing competition. The media personality then said he was quiet while “they attacked him” and it was his mom – veteran actress Mary Twala that fought for him.

“It was my mother, not me. It’s beyond my control. My mother told me not to fight, she will do it for me,” he said as a screenshot of an article introducing Thembi Seete and JR as the new judges appeared on screen.

“My god said do not revenge. Do not avenge. Be quiet, I will revenge for you. They attacked me and I was quiet. One by one watch them drop like this. This time I didn’t even do anything to them,” he continued.

THE BEEF BETWEEN SOMGAGA AND UNATHI NKAYI

Somizi did not mention names but Unathi and Randall were the two Idols SA judges that were not returning to the show. The media personality only publicly had beef with Unathi. So, he may have been referring to her.

What happened between Unathi and Somizi? Well Unathi basically cancelled him after his estranged husband Mohale Motaung accused him of physically and psychologically abusing him.

The former Kaya FM radio host posted that she will not allow people to listen to American singer R Kelly because he was convicted of sexual abuse.  An Instagrammer called her out for having double standards because she is friends with DJ Fresh and Euphonik who were accused of rape and Somizi after the abuse allegations made against him. However, she said she was not friends with the media personality.