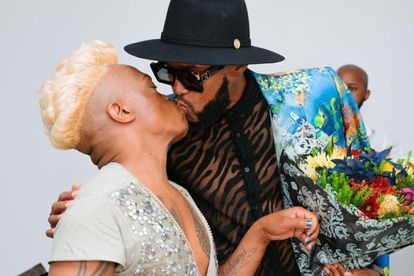 Media personality Somizi Mhlongo is addressed his estranged husband Mohale Motaung’s leaked audio clip confessions for the first time since August 2021 – on the first episode of fifth season of Living the Dream with Somizi which aired on Showmax today (4 May).

MOHALE CLAIMS HE WAS ‘UNCOMFORTABLE’ WITH AN OPEN MARRIAGE

Somizi Mhlongo addressed Mohale Motaung’s claims that they had an open marriage and threesomeones – on the first episode of the fifth season of his reality show. Mohale claimed that he was “uncomfortable” that the media personality inviting other sexual partners into their marriage – in audio clips leaked by Sunday World.

The leaked audio clips by Sunday World was a conversation between Mohale and the previous producers of Living the Dream with Somizi.

The pair announced their divorce in August 2021.

Somizi has now revealed that his sex life with Mohale “wasn’t great”. So, he suggested an “versatile” relationship or sex therapy to make their marriage work.

“As you may know that my suggestion of not an open relationship, a versatile relationship where (for) the benefit of our marriage,” he said while on a call with his bestie Vusi Nova.

“I was dealing with someone who had issues with sex or I don’t know what you call it. I try to find ways of making it work. The sex life was dead. I still stayed but I said to him let’s find other ways. Either we could go for sex therapy – he did not want to go because he was in denial of the fact that our sex life wasn’t great,” he continued.

Watch the trailer of the series below,