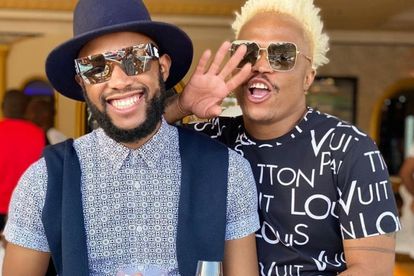 After cancelling media personality Somizi Mhlongo, Tweeps seem to have a change of heart as they believe Mohale “loathed” him. This follows the first episode of the fifth season of Living the Dream with Somizi which was released today (4 May).

Somizi Mhlongo addressed “Mohale’s confessions” in the form of audio clips leaked by Sunday World in 2021. Mohale claimed he was physically and psychologically abuse by Somizi and made shocking allegations about their sex life.

His reality show is the first time that Somizi spoke out about the leaked audio clips. One take away from the episode was that his bestie – Vusi Nova, daughter Bahumi Mhlongo, “baby mama” Palesa Madisakwane – each expressed that Somizi really loved Mohale.

However, Twitter users are now convinced Mohale did not love Somizi but he was in it for the money instead. Take a look…

“It sounds like Mohale loathed Somizi. It doesn’t sound like someone who genuinely liked him let alone love him. One would suggest he was in it for the money. I mean the sex is horrible in your marriage, instead of making it work, you show little interest? ????????????‍♀️ #LTDWSomizi,” tweeted @_MmaDitaba.

“Somizi was drunk in love and others saw right through Mohale..????????‍♀️,” tweeted @Siphokazi_MB.

“I ignored all the red flags. Most of the time we would go to events together but he would storm out and leave me, he would not sleep at home because he’s angry’.Mohale was there for money and fame ????????#LTDWSOMIZI,” tweeted @MasegoMogapi9.