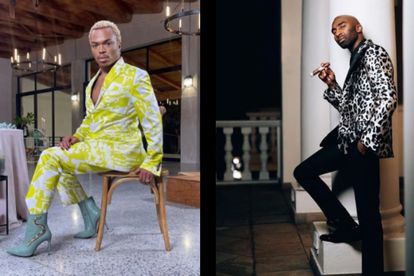 South African media personality Somizi Mhlongo opened up about rapper Riky Rick’s death on the season finale of his reality show which aired on Showmax on Wednesday 6 July.

Somizi Mhlongo opened up about later rapper Riky Rick’s death on the season finale of his reality show. The Idols SA judge is seen sitting next to his “bestie” Vusi Nova on a couch as they discuss Rik Rick’s death.

“Shock of my life. I was just like no way, they’re lying. Like I ever tried to call his number, I called his cousin Bandile and them,” said Vusi.

Somizi then revealed that he had a dream about the late rapper.

“I had a dream about Riky tweeting me… stop posting lies about me. I woke up all excited,” he said.

The media personality the explained that Riky Rick’s death triggered some of his own emotions because he contemplated suicide.

“Riky’s passing has really triggered some emotions because I always take it personally when someone says, ‘people who commit suicide, they’re being cowards,’ and stuff like that. For me, I have been on the verge of committing suicide,” he said.

“I know maybe 50 percent of what that darkness feels like. So, it triggered me,” he continued.

WHAT HAPPENED TO RIKY RICK?

Riky Rick’s family confirmed his death on 23 February. He was believed to have taken his own life. The rapper struggled with depression.

Sunday World reported that the rapper was found by his management team at about 8.30am. Apparently he was rushed to a nearby hospital as he was still alive.

“Unfortunately he died when they were en route to the hospital,” said the source who did not want to be named to the publication.

Riky Rick tweeted a cryptic quote at 03:00am on the day that he allegedly took his own life.

“I’ll return a stronger man. This land is still my home,” he tweeted.

ALSO READ: ‘My family gives me purpose’: Where did Riky Rick meet his wife Bianca?