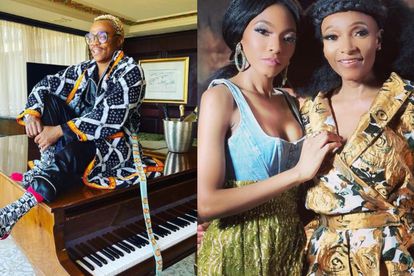 1. SOMIZI DID NOT PAY DAMAGES FOR BAHUMI

Somizi and actress Palesa Madisakwane share 26-year-old daughter Bahumi Mhlongo. Palesa revealed that Somizi did not pay damages for Bahumi on the fifth season of the series.

She said that she kept quiet when Somizi married Mohale Motaung because he had multiple weddings without paying damages.

“He decided to go pay lobola and have multiple weddings without paying damages for my child. So, I just stood back and observed,” she said.

2. PALESA FOUND OUT SOMIZI WAS GAY AFTER SHE FELL PREGNANT

The actress also revealed that she had just found out that Somizi was gay and she fell pregnant with Bahumi. So, it was a confusing time in her life because she did not understand what being gay meant.

“I had also just found out that he was gay and I had fallen pregnant with his child, you know? It was a confusing time of my life to understand what being gay meant. I think in my little girl’s mind, I thought I had a boyfriend,” she said.

Palesa also revealed that Somizi’s mom veteran actress Mary Twala knew he was gay and told her she could leave their daughter with her.

“When I went to speak to Somizi’s mother and his sister, I remember Somizi’s mother saying ‘my child, you can see how Somizi is. He isn’t like other boys. Give us the child and go on with your life,” she said.

Palesa’s comment set tongues wagging on Twitter but she then cleared the air on what she meant. Take a look…

“When ma said I can give the baby to them, she was not ordering me, she was not insisting or taking my baby away from me. As a caring and loving mother she was to me she meant she will take care of my baby and she loved me enough to want to see me go back to school and make a good life for myself,” she wrote.

“Anytime any day I was allowed to fetch my baby and visit my baby hence I became part of the family. Please note most of these clips are edited out because of time. So please do not misinterpret or misunderstand the conversation. God blessed me with a beautiful and loving mother and family. May her beautiful soul rest in peace,” she continued.