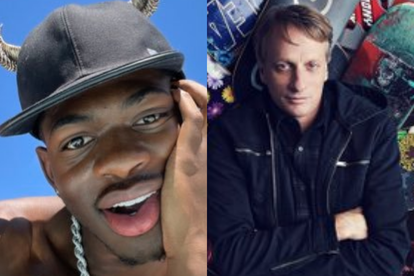 Lil Nas X recently surprised his fans with a clip of himself doing some pro-skater skateboard moves with skateboarding champ Tony Hawk.

Their surprise follows a little rant the rapper went on after Tony Hawk released a line of “bloody skateboards” that were better received than his “Devil Shoes.”

In case you missed it, Lil Nas X found himself trending on Twitter after he called society out for what he believes are “double standards.” It all started when legendary skateboarder Tony Hawk teamed up with beverage company Liquid Death to release a line of skateboards that were decorated with the blood of the pro-skater.

People across the world seemed to love the concept and soon the limited edition skateboards were sold out. Lil Nas X felt very affronted by this especially because earlier this year he released a line of sneakers that contained blood and a bible verse on them and folks were just not having it.

Fast-forward a few days later and Nas has seemingly forgotten all about it. The Old Town Road artist took to his TikTok on 31 August to share a clip of himself doing some cool skateboard tricks while being guided by Tony Hawk.

“Hey, I’m Lil Nas X, and today I’m gonna be doing some airs, maybe a McTwist – let’s go,” he can be heard saying in the video before doing his tricks.

Of course, fans wanted to have their say about the matter especially since many of them jumped to defend their favourite rapper against society’s “double standards.” Many of them welcomed the fact that Lil Nas X was able to sweep his animosity toward Tony Hawk under the rug while others called him a hypocrite: