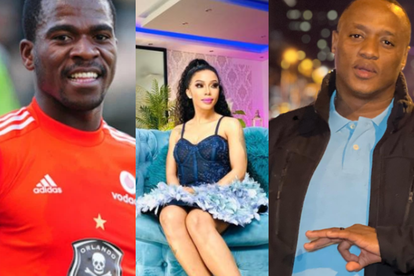 ‘Life with Kelly Khumalo’ has drawn to an end. Images via photo flickr and Instagram @kellykhumaloza @official_jubjub.

‘Life with Kelly Khumalo’ has drawn to an end. Images via photo flickr and Instagram @kellykhumaloza @official_jubjub.

We are currently on the fourth episode of Showmax’s Life With Kelly Khumalo and here are three times the singer threw shade at those around her.

The singer kicked off season three of Life with Kelly Khumalo by throwing shade at her “baby daddy” Senzo Meyiwa’s family. Senzo and the singer have a seven-year-old daughter named Thingo together.

She said that the former Bafana Bafana captain’s family never loved him. Kelly then said his mother’s reaction to his death was about who was going to buy them food, which she seemed to have not liked.

“That family did not love Senzo. They never loved him, he was the cash cow. You know the first thing that, that women said when Senzo passed on? She said who is going to feed us. Your son is dead, the only thing you are thinking about is food,” she said.

THE SINGER DRAGS JUB JUB AND HIS MOM?

Kelly also addressed her first “baby daddy” TV host Jub Jub’s Mother’s Day post to her. Jub Jub and Kelly have a 12-year-old son named Christian together. She firmly stated that the TV host should not disrespect her.

“I know a man who wants a relationship with his child when I see one. I will never stand in the way of that. However, don’t disrespect me,” she said.

She later stated that Christian feels entitled like his father and implied that the Uyajola 9/9 host’s mom – known as “Mama Jackie” – had a hand in that.

“His father had his faults and whatever, but I feel like his mother also had a hand in him becoming who he is today. And I don’t want to be that kind of a mother. Remain grounded at all times. You are growing and as you grow if I let certain things slide we are going to have problems in the future,” she said.

KELLY CALLS OUT HER OWN MOM

The singer also called out her own mom –Ntombi Khumalo. She said that one of the reasons she was upset with her sister was because of her mom.

The biggest issue is I felt my mother wasn’t doing her part,” she said in a therapy session.