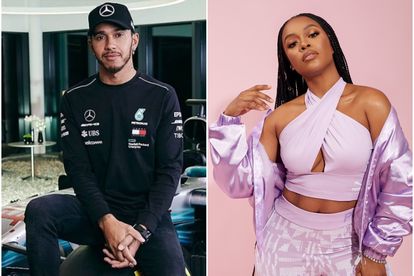 Lewis Hamilton is leading the call for Formula One to start racing in Africa again, and in particular the “motherland”; South Africa …and it may have something to do with Nomzamo Mbatha…

The Mercedes-Benz driver last week advocated for the organisation to “return” to the continent, after they last raced on Johannesburg’s Kyalami circuit in 1993.

He told reporters ahead of his race at the F1 Grand Prix in Texas:

“The place that I really feel is dear to my heart and most important for me is to get a race back in South Africa. I think there’s a great following out there and it would be great to be able to highlight just how beautiful the motherland is”.

ALSO READ: Driving in style: Lewis Hamilton rocks a kilt in Turkey ahead of Grand Prix

Lewis Hamilton met South African actress Nomzamo Mbatha in 2019 in the United Arab Emirates (UAE) at the Abu Dhabhi Grand Prix…and it looks like their meeting left a lasting impression on the acclaimed racetrack star.

Nomzamo shared a video of meeting her F1 “crush” on Instagram, with the pair excitedly chatting together.

“A champion! Such a fantastic human being and an inspiration to a generation. There can only be one,” she captioned the post.

She also called Lewis the “the sweetest man on Earth” in her Instagram Stories, claims South African blogger and entertainment commentator Phil Mphela.

Both Nomzamo and Lewis are proud supporters of the Black Lives Matter movement and have actively been involved in the fight against racism around the world.

Lewis — the first, and so far the only black driver in the history of F1 — has also called for diversity in the “elite sport”, and successfully campaigned for Mercedes-Benz to switch the color of its livery from its traditional silver to black in support of the movement.

Like many celebrities around the world, he is also inspired by the work of the former late president of South Africa Nelson Mandela.

Lewis met the Springbok captain and the rest of the squad at the Laureus World Sports Awards in Berlin, Germany last year.

And Trevor and Lewis are basically besties, often hanging out together. The athlete even appeared on an episode of The Daily Show, where he discussed his humble upbringing.

Perhaps they can make a trip “home” together!