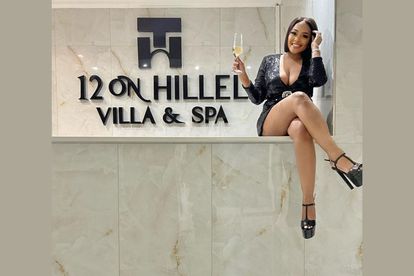 South African media personality Lerato Kganyago is literally going through the most these days – especially on social media. The TV and radio presenter has been mocked about her work and her marriage and now even finds herself defending her hotel Valentine’s Day gift which left many South Africans with their jaws dropped. This after a local publication reported that she does not actually own the luxury hotel that was gifted to her earlier this year.

Taking to Twitter last week, Kganyago shared what appears to be a low-key response to the rumours.

Lerato Kganyago unbothered by rumours about ‘her hotel’

Last month, a source told City Press that Lerato Kganyago does not in fact own the pricy hotel called 12 on Hillel Villa and Spa in Northcliff, Johannesburg.

This after Kganyago headed online to share that her husband Thami Ndladla had given her the hotel as a Valentine’s Day gift earlier this year.

The source however begged to differ and called the entire thing a publicity stunt while adding that the media personality is just the face but not the owner:

“That Valentine’s Day gift noise that she made was just a publicity stunt. Thami did not buy her that hotel. She just featured as a face and used the opportunity because her fans were looking forward to her gift for this year since,” the source was quoted as saying.

While Lerato doesn’t seem to have any plans of confirming or denying the statements, she has since removed the viral Valentine’s Day post from her Instagram page.

Kganyago however doesn’t appear to be phased by the rumours and recently shared what appears to be a low-key response to all of the rumours.

Responding to a tweet about journalism being a joke in South Africa – a clear jab over the hotel article, Kganyago wrote that she doesn’t mind.

According to her, it’s all about the free PR.