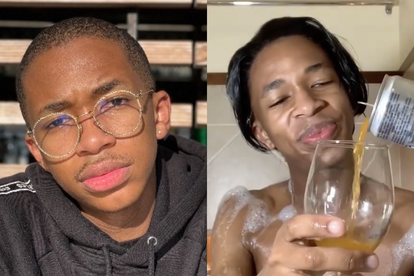 South African social media star Lasizwe is clearly hurt by all the backlash he recently received over the #R10GoesALongWay initiative.

It all started when the YouTube presenter was accused of using the R2 million that he raised for the initiative. He has now headed online to share a scathing clap-back.

Meanwhile, his sister Khanyi Mbau has also come to his defence.

Lasizwe claps back over #R10GoesALongWay

Local media personality Lasizwe is done sitting back while his name is being dragged. The YouTube star was recently accused of using a student fund initiative for personal gain and he is not happy about it.

The buzz around the alleged missing R2 million started after people started questioning what happened to the money that was raised by Lasizwe’s #R10GoesALongWay campaign.

As they do, many social media users were soon pointing their fingers at an affronted Lasizwe who took to Twitter on 28 August to share a clip of himself addressing the accusations.

“You do bad they crucify, you good they still crucify you. I am honestly hurt this time around. I think this is my first and last time doing #R10GoesALongWay .To all the students that benefited from this, please do your best and pass!.. don’t do it for me do it for yourself.❤️

ALSO READ: Where is the R2m for students, Lasizwe? Tweeps want answers

Lasizwe’s sister Khanyi Mbau also decided that she would break her silence about the accusations and said that she was “heartbroken” over the way that Lasiwe was being treated after trying to help South African students in need:

“This breaks my heart, not only because you are my brother but how a good gesture could turn so bad and we forget the intention behind @lasizwe starting this. Funda can we please get an explanation for this unfortunate case affecting the nation,” she wrote in a tweet.

Meanwhile, Mzansi has their say:

“The question is why these companies and individuals donated to LaSizwe instead of directly to the students. Answers must come from them, @StandardBankZA gave LaSizwe a whole million for what?”

“It’s our R10’s so it is our right to know how our money was used. We don’t care about your pity party. Accountability is not an accusation.”