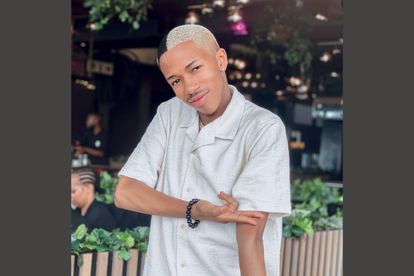 Lasizwe wears a G-string to Konka. Image via Instagram @lasizwe.

Lasizwe wears a G-string to Konka. Image via Instagram @lasizwe.

Social media star Lasizwe Dambuza was inspired by DJ Uncle Waffles and wore a G-string to Konka on Sunday 2 December.

“Just landed in Cape Town. I want to wear a G-string at the Konka event today,” he tweeted.

Lasizwe was in Cape Town and went shopping at what appears to be a lingerie store. He seemed to be keeping his options open at first but then asked for a thong like Uncle Waffles. He also dubbed himself “Aunty Pancakes.” Take a look…

“Today I want to channel my inner Uncle Waffles @unclewaffles_, Call me Aunty Pancakes Today,” the post was captioned.

Take a look at Lasizwe partying at Konka.

TWEEPS: ‘PAY BACK THE R2 MILLION’

Twitter users brought up the R2 million for students yet again in the comments section of the post.

“That one must pay back that R2 Million,” wrote @ChristExcel102.

Lasizwe previously explained that attraining the tax clearance has been a time-consuming process.

“Usually, I’d be upset about the backlash and worry about what people are saying but this time around, I thought let them be. They don’t know what they’re talking about,” said Lasizwe to Daily Sun.

“Some companies that pledged to the initiative had to get tax clearances and it’s been a long process. Fundi has its own protocols it needs to adhere to,” he added.

Other Tweeps thought he was chasing clout and trying to stay relevant.