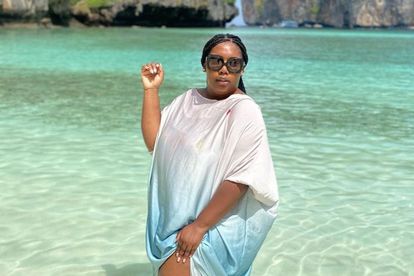 Twitter uses are dragging Nonkanyiso “LaConco” Conco for being too private and secretive after the latest episode of the Real Housewives of Durban (RHOD) premiered this morning (25 March).

THE LADIES WEIGH IN ON ‘PETAL’

The latest episode of The Real Housewives of Durban(RHOD) saw the ladies unpack drama from the previous episodes with burning questions. Annie invited Sorisha Naidoo, Londie London and Jojo Robinson over to her new home.

The four ladies discussed LaConco receiving flowers at a previous event and Annie and Jojo thought she may have sent them to herself.

Londie and Sorisha seemed to think the person who sent the flowers was not made up but what did Tweeps think? Twitter users were on the fence about LaConco’s love life but dragged her for being so private on a reality show.

ALSO READ: ‘RHOD’: Have you slept with any man after marrying Musa Mseleku?

Twitter users thought that LaConco was being too secretive for someone starring on a reality show. Take a look…

“Why is laconco on this show if she doesn’t wanna share her life on the show. Trust & believe we don’t wanna hear none about you & the former president,  you don’t use that as a storyline anymore, we are over it. Just share something or leave the show #RHODurban,” tweeted @iamprescribed.

“Next season can mabusi be a main cast too and laconco, Lonnie, jojo and makhumalo be canned and bring new cast members coz these ones bring zero to the show,” tweeted @iamprescribed.

“Laconco is just too private for a reality show. She takes away the whole point of a reality show! #RHODurban,” tweeted @palie_entle.

“I need Laconco to get off this high moral ground she’s on, thinking she’s more mature than everyone else. Give us something different, carrying yourself like a 84 year old woman is so boring. #RHODurban,” tweeted @Londoloza_r.