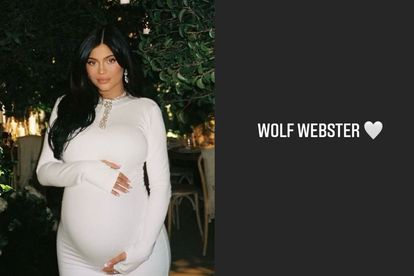 Reality star and make up mogul Kylie Jenner hinted that she named her newborn son Wolf Webster via her Instagram story on Friday 11 February and Tweeps are shocked.

Kylie Jenner announced her pregnancy in September 2021. The makeup mogul and rapper Travis Scott welcomed their second child together on 2 February. This is just one day after their daughter Stormi Webster’s fourth birthday on 1 February.

Many social media users were convinced Kylie named her son “Angel” after members of the Kardashian and Jenner family referenced angel emojis under her announcement post.

The Keeping Up With The Kardashians star has since hinted that she named her son Wolf Webster. This is because she posted an Instagram story with the name “Wolf Webster” with a white heart emoji. Take a look…

TWEEPS: ‘THIS GIRL NAMED HER DOG NORMAN BUT HER HUMAN CHILD WOLF’

Twitter users were amused by the reality star naming her son Wolf. Some Tweeps thought it was odd that she named her dog Norman, as seen in Keeping Up With The Kardashians but her “human child” Wolf.

“Honestly celebrities really be picking random names out of the dictionary and naming their kids them cause Wolf Webster?” wrote @misseverywhereg.

“I don’t judge a single baby name but i would not be pregnant for nine months to name my baby wolf webster,” wrote @raviyulii.

“Me when I see that Kylie Jenner named her son Wolf Webster,” wrote @lopizka.

“I hope kylie and travis know that this will be the room when teachers say “wolf webster” in class:,” wrote @tynextjes.