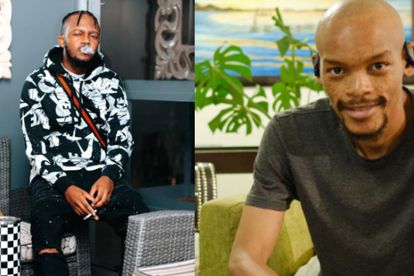 South African music executive Nota Baloyi slammed rapper Kwesta for “getting a stripper pregnant” on an episode of POV X Gigi podcast which was released on YouTube on 23 August.

NOTA: ‘KWESTA GETS A STRIPPER PREGNANT’

Nota Baloyi took a swipe at Senzo Brikka Vilakazi, popularly known as Kwesta, an episode of POVXGIGI podcast which was released on YouTube on 23 August. The music executive claimed that when “Kwesta got a stripper pregnant” he had to make sure the rapper had enough money to take care of his “baby mama” and child.

“When he got his girlfriend pregnant, as much as I did not approve of the relationship or whatever. First things first, Drum Magazine ‘Kwesta gets stripper pregnant’,” he said.

“Now I need to be like okay, this guy has got a career in music, he needs to support this girl and he needs to make sure that he is making enough money to stop her from working at lollipop lounge occasionally,” he continued.

He went on to say that he had to be a father to an adult.

“I’m not his father but I need to make sure that he is making enough money so that he can support his girlfriend. So, that he can keep her and protect her from being on the streets. Which means I can’t be reckless and get some girl pregnant at the same time,” he added.

Kwesta is known to have two daughters with his wife Yolanda Vilakazi. So, it is unclear who Nota is referring to.

ALSO READ: Proposal No 2! Who is Kwesta’s wife Yolanda Vilakazi?

“NOTA in every podcast his invited to,” wrote @TheRealBoyza.

“Having Nota in your life is a curse from the Gods! The man is a walking curse ????,” wrote @NoXs_Malcom.